It wasn’t until after I’d had surgery that I was informed I’d been suffering with ulcerative colitis. I say suffering, but of course I’d been living without realising what was going on inside my body; and that’s why I think this is an important thing to talk about. The fact I didn’t know and ended up so severely, makes me wonder how many other people in the world are unknowingly living with IBD.

Of course I knew something was up, I was living on a daily dose of laxatives, getting up two hours earlier than necessary, drinking a lot of coffee and smoking just in the hopes of going to the toilet. These methods worked on an irregular basis, so to ensure I could go to the toilet at least every other day, I had an extremely high fibre diet. For some reason most people associate IBD with diarrhea, but I was the complete opposite, dealing with intense constipation constantly. Alongside this, I had lost a lot of weight. Growing up a chubby kid, and settling down to a size 10 around the age 17, I rapidly went down to a size 6. Of course I was chuffed with this, I’d always struggled with my body image and to finally be so skinny I thought I’d acheived something great.

When I was 16 I tried the pill, but the doctors soon took me off of it as it was messing with my hormones. I was left the choice of two non hormonal pills, which either made me gain weight or just bat shit crazy. In the end, when I was 18, I tried the depo injection. Again, I was an emotional mess on it, so I came off of it. The 9 months that followed the injection left me with irregular bleeding. My stomach would cramp like crazy and I would thank God when I wasn’t on my period for a day. I’d been in and out of the doctors for this for quite some time. Until one day, at work, I noticed I had a vast amount of bleeding down the back of my leg. It had come from my rectum. I had been suffering with cramps that day, and went to the doctors. I told the doctor what had happened, but he rolled his eyes at me and told me it was just my irregular periods. I insisted that it wasn’t, and explained I had checked where the bleeding had come from. Ignoring what I had said, he sent me in for a cervical scan at the hospital. Of course, my scan showed the all clear, and my questions were left unanswered.

They had ignored my weight loss due to the fact I had suffered with bulimia in the past, and tried to convince me the bleeding and cramps were due to my depo injection. They continued to give me laxatives for my constipation, and I was left feeling like a hypochondriac.

Certain things were a struggle, feeling confident enough to go out; knowing I was constantly bloated. Sitting at my desk at work cramping over in pain. Not being able to eat foods I enjoyed because I couldn’t risk the pain it would cause. And of course feeling like nobody believed something was wrong. Even before my emergency surgery, I had been to A&E 3 times. Each time they informed me I just had a stomach bug, it was just my periods, I was just overreacting…

So, to tell you the truth, I don’t know what it’s like to have ulcerative colitis. Because I was always given a different explanation as to what my symptoms showed. Had it been diagnosed earlier, there is a strong chance it could have been medicated and I wouldn’t have had to undergo surgery. I urge anybody experiencing symptoms they feel are strange, to fight for an answer. We as humans know our own bodies, and we know when something just isn’t right. It’s scary how we can live whilst our bodies are silently failing us. And how close we can come to death. I wish I could tell you what it was like to have ulcerative colitis, that I’d had an answer. But I hope the symptoms I’ve talked about in this post can help anybody else struggling in a similar situation. 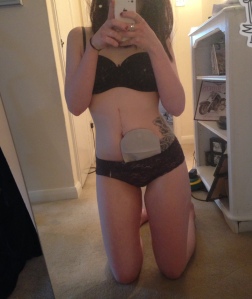 One thought on “What It Is Like To Have Ulcerative Colitis”

Have You Tried This Product?

A Colostomy Bag You Can Flush Down Any Domestic Toilet System!